I posted the video of Binny’s speech that he gave at the Team Lifeline Pasta Party on his Facebook page, but the sound quality was poor and people asked for copies of the speech. So with Binny’s permission, I am posting it here. I edited it a bit to include some of the lines he ad-libbed, though I know I missed some. But bottom line, this is all his.

This is why we support Chai Lifeline.

I have a question for everyone here.

What do you remember about being 8 years old? Like, third grade. What was that like for you? I’m sure if you think back to that, you’ll have memories of school projects, playdates after school, and maybe family trips.

I’m not sure how many of you will include memories of hospitals, surgeons, oncologists, MRIs, CT scans, and IVs. If you ask the average 8 year old, the only doctor they have is their “Doctor”- their pediatrician. By the time I was 9, I had a brain surgeon, a neurologist, an oncologist, a neuro-radiologist, an anesthesiologist, a cardiologist, and don’t worry, a really good therapist. When I was 8, I wasn’t so worried about school projects and playdates because I was more concerned about the brain tumor that decided to show up in my life and create some memories that I wish I could forget.

So yeah. Third grade wasn’t the best. Neither was 4th. In fact, once I was diagnosed, literally nothing was the same for me. But that was also when I met Chai Lifeline. And suddenly, I started getting some memories that I actually never wanted to forget. Chai Lifeline was there for every appointment, every inpatient stay, every time I was home from school. I know you probably hear parents talk about Chai Lifeline and how they bring smiles and joy and all that great stuff that you see on videos, but let me break down for you what Chai Lifeline REALLY is.

When Chai Lifeline volunteers showed up, I knew the day would probably end with me covered in shaving cream, or glitter, or drenched from a water fight. I knew that I’d be driving in some sick car to do some activity that would be on most kids Make-A-Wish list. This wasn’t just a one time thing either. Their job was to keep me happy, get me away from my always worried parents (sorry ma, but you know it’s true) and just let me forget about whatever horrible day I was having. When I was in the hospital, the staff always knew who we were. I think my room was always on probation because what other room would have Rave parties late at night when everyone else was sleeping? With Chai Lifeline, the party was always on and I knew that no matter what, they would show up.

Those were just the small things. The big things?  I went to Disney on an amazing 4 day trip. That was huge. I went to Camp Simcha. I met kids just like me (well, lets be real. No one is just like me, but you know what I mean). I met one of my best friends. And I met counselors who became my brothers. I learned that I was much more than the kid with the brain tumor and most important, I was given a chance to be free from all the medical drama for a few weeks. My life might have become a mess when I was 8 years old, but Chai Lifeline was there to make sure that between doctors and hospitals, that I could still be a kid. And even though the volunteers were totally insane, they were probably the most sane part of what was the most insane time in mine and my family’s life.

I’m 13 right now and it would be great to say that it’s years later and now I spend my time giving back to Chai Lifeline, but unfortunately, things didn’t play out that way. I mean, it started like that. My mom had run with Team Lifeline for two years and last year, I planned on joining her. I signed up to run the Miami Half-Marathon in honor of my upcoming Bar Mitzvah. I know there are some bar and bat mitzvah runners out there tonight. Here’s a shout out. Nice work! 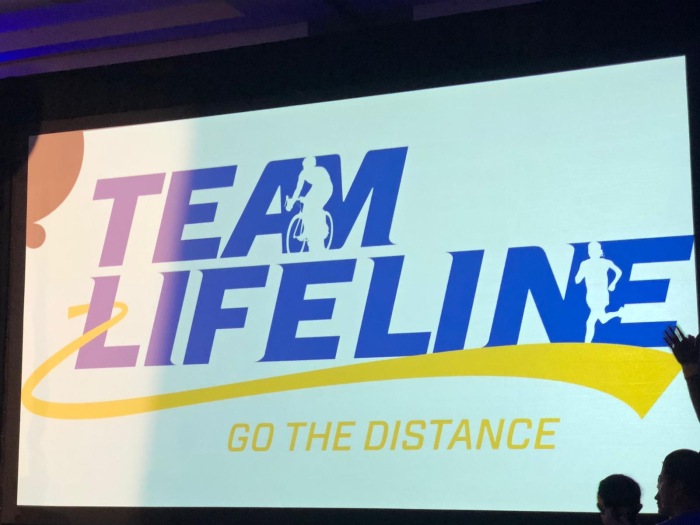 So I started training for the race. But that October, we found out that my brain tumor had come back. And this time, it brought some friends.

I still was able to run the race last year and I finished the 13.1 miles. But the very next day I got on a plane to Washington DC to start treatment. And once again, my life turned upside down.

So remember I asked you if you remember 3rd grade? What if I asked you to remember Middle School? I’m pretty sure that again our memories won’t be the same. I was back at home more often than school. I was flying back and forth to DC. I was a regular in our local ER. When everyone else was learning Algebra, I learned how to take out my own IV – trust me, it gets you out of the hospital faster – and learning the difference between good chemo drugs and bad chemo drugs. When other kids were dying their hair strange colors, I was watching my hair slowly change colors by itself from these experimental drugs I was on. Seriously, this color costs a fortune. Ask my insurance company.

And Chai Lifeline showed up again. Southeast, Mid-Atlantic, and NY. They met me at the airport with a party bus, they took me to a farm, an amusement park, a haunted house and other places, like the Oval Office. The Oval Office. Yes, I mean THAT oval office. They made sure every second I was not at the hospital I was doing something completely NOT hospital. They even brought baby ducks to me because they heard I liked them. Really, by the way. They are so cute. You need to check them out on YouTube. And I went back to Camp Simcha. This time as a teenager.

All of this was possible because of all of you. Team Lifeline. I ran last year before I started treatment and my plan was to do it again. Unfortunately, these tumors and my doctors have benched me for the season, so I can’t join all of you on the race course tomorrow. Trust me, I tried.

But here’s the deal. Being a part of Team Lifeline means that we run for all the kids, like me, who suddenly find themselves in a messed up world and who need to fill their lives with memories that block out the bad ones. So even though I’m on Team Binny, I’m also a part of Team Cara, Team Jacob, Team Sophie, Team Peri, and Team Avi. Maybe even Team Penina’s Helping Hand (even though you guys beat us in fundraising). And I’ll always be on Team Coby. Not Bryant, by the way. I mean my good friend, who I miss very much, and who taught me two very important words that first summer at Simcha: Sedation MRI.

Good luck tomorrow and thank you.

Like Loading...
‹ Dueling with God
To My Students (on the day before we start our online class) ›

Teacher, writer, mother. Not necessarily in that order. I blog here and on Huff Post.